Cross of the Martyrs

Cross of the Martyrs 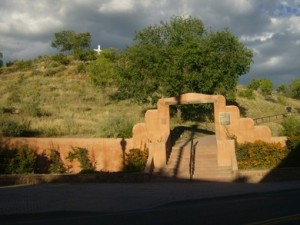 Address: The foothill of the Cross is on Paseo de Peralta, north of East Marcy Street

The white Cross of the Martyrs sits highly visible atop Fort Marcy Park and is on every tourist map of Santa Fe. There are three very good reasons to visit it. First, when you reach it you are rewarded with a stunning view of Santa Fe, the Jemez Mountains and the Sangre de Cristos (Blood of Christ Mountains). Second, the gentle gradient of this easy, winding path is an enjoyable and energizing hike. Third, you learn from the plaques placed alongside the path by the Historic Santa Fe Foundation that chronicle a 400-year history of this city. It starts with the Spanish building the City of Holy Faith (Santa Fe) in 1610, to how they colonized the surrounding areas, and onto the progress present-day New Mexico State has made.

Walking up this paved trail you may notice circular fireplaces with remnants of charred coals. The fireplaces are lit with farolitos or bonfires when, during the first week in September, the city sponsors the oldest community gathering of its kind in the country, the ìFiesta de Santa Fe.î This Fiesta was inaugurated in 1692 to celebrate the peaceful return of the Spanish. On the final night of Fiesta Week, Mass is celebrated at St. Francis Cathedral followed by a candlelight procession up to the Cross. The Cross was built to honor 21 fallen Franciscan friars in the 1680 Pueblo Indian Revolt. The Indians revolted because of dire straits and poverty brought on by drought, slavery and mistreatment by the Spanish colonialists; with the unfortunate consequence of the 21 friars being killed. Even today, many older Santafesinos of Hispanic ancestry consider walking up this trail as making personal pilgrimages.