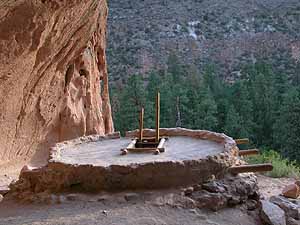 Bandelier National Monument protects over 33,000 acres of rugged but beautiful canyon and mesa country as well as evidence of a human presence here going back over 11,000 years. Petroglyphs, dwellings carved into the soft rock cliffs, and standing masonry walls pay tribute to the early days of a culture that still survives in the surrounding communities.

Bandelier’s human history extends back for over 10,000 years when nomadic hunter-gatherers followed migrating wildlife across the mesas and canyons. By 1150 CE Ancestral Pueblo people began to build more permanent settlements. Reminders of these past times are still evident in the park as are the strong ties of the modern Pueblo people. By 1550 the Ancestral Pueblo people had moved from their homes here to pueblos along the Rio Grande (Cochiti, San Felipe, San Ildefonso, Santa Clara, Santo Domingo).

In 1916 legislation to create Bandelier National Monument was signed by President Woodrow Wilson. In 1925 Evelyn Frey and her husband, George, arrived to take over the Ranch of the 10 Elders that had been built by Judge Abbott in 1907. Between 1934 and 1941 workers from the Civilian Conservation Corps (CCC) worked from a camp constructed in Frijoles Canyon. Among their accomplishments is the road into Frijoles Canyon, the current visitor center, a new lodge, and miles of trails. For several years during World War II the park was closed to the public and the Bandelier lodge was used to house Manhattan Project scientists and military personnel.